The objective of this research project was the reduction of the mesurement time, and the possibility of using a simple slide projector instead of those based on LCD or DLP matrices.

Fig. 1 shows the concept: the projecion of a number of fringe patterns, typical of the GCM, GCPS and PSM techniques is replaced by the projection of a single pattern, as for the SGM approach.

As depicted in Fig. 2, the optical head is simplified, and, in principle, it is possible to design the instrument in such a way that a very compact, low cost optical head is obtained.

The slide projector typically projects steady patterns as the one shown in Fig. 3.

The elaboration follows the DFGM approach and results into two phase maps whose sensitivity to height variations is proportional to the period of the two components. The pattern at higher spatial period is used to save the range of the measurement, and the pattern at the lower period is used to increase the resolution (Fig. 4).

The information from the two phase maps is used by the tringulation formula to compute the height of the object (the relative approach is used). The triangulation is performed on a relative basis, i.e., the geometrical parameters of the optical head must be accurately determined and given as input to the system. The shape map is relative with respect to a reference surface (a plane).

Fig. 5 shows an example of the quality of the obtained point clouds. Typical values of the measurement errors are in the range of 0.2 mm – 0.3 mm over an illumination area of 300mm x 230mm, and a measurement interval up to 100mm. 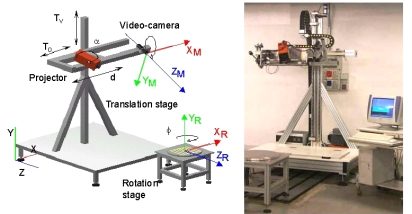 As shown in Fig. 1, the system is composed by the optical head and two moving stages. The optical head exploits active stereo vision. The projection device, LCD based, projects on the target object bi-dimensional patterns of non-coherent light suitable to implement the SGM, PSM GCM and GCPS techniques for light coding. Each point cloud is expressed in the reference system of the optical head (XM, YM, ZM).

The optical head is mounted on a moving stage, allowing its translation along the vertical and the horizontal directions (Tv, To); as shown in Fig. 2, areas large up to two square meters can be scanned and large surfaces can be measured by acquiring and aligning a number of separate patches. The objects presenting circular symmetry can be placed on a rotation stage: it enables the acquisition of views at different values of the rotation angle.

The system is equipped with stepped motors, to fully control the rotation and the translation of the optical head. Each view is aligned by means of rototraslation matrices in the coordinate system (XR, YR, ZR), centerd on the rotation stage. The sequence of acquisition of the range images is decided on the basis of the dimension and the shape of the object, and is performed automatically.

Fast calibration is provided, both for the optical head and for the rotation stage. 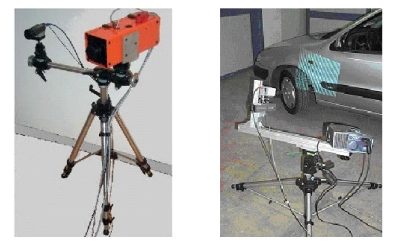 The system exploits active stereo vision (the absolute approach is implemented) using time-multiplexing based on the Gray-Code-Phase-Shifting method.

OPL-3D can host a wide variety of projectors. In the left figure in Fig. 1 the device is the ABW LCD 320: it is a microprocessor-controlled and column-driven projector, specifically intended to be used in this class of systems. Alternatively, those devices currently available for video projection can be succesfully used, as that one shown on the right figure in Fig. 1 (Kodak DP 900, based on DLP technology).

The detector is a commercial CCD video camera. In the configurations shown in Fig. 1, the camera is an inexpensive colour Hitachi KP D50, with standard resolution (752 x 582 px). However, any type of camera (black/white or colour, with single or multiple CCDs for colour separation, and with different pixel densities) can be mounted on the system, depending on the application and on the projector used. In Fig. 2, for example, a 1300 x 1030 px digital video camera (Basler model) is mounted, to acquire at the required resolution large fields of views

The projector and the camera are mounted onto a rigid bar, that can be easily moved around the scene by means of a tripod, and that holds the adjustment units for proper orientation. The mount is fully reconfigurable: all parameters can be varied according to the distance from the target, the required measurement resolution and the FoV (Fig. 3).

Given the fact that through sophisticated calibration procedures the system is able to finely estimate the operating parameters, no accurate positioning equipment (micropositioners, microrotators) is required, the only requirement being stability of the mount during the measurement procedure.

Fig. 4 shows two examples of on-site measurements of complex shapes where the full flexibility of the system was mandatory to perform the acquisition.

OPL-3D is equipped with a PC, that has the purpose of (i) driving the projector with the appropriate pattern sequence, (ii) acquiring the image sequences from the target, and (iii) elaborating the images. In addition, it contains all the features to perform sophisticated procedures for setting up and reconfiguration.

The PC is in the current configuration a Pentium III 900 MHz, 1 GB Ram, equipped with a Matrox Meteor II Frame Grabber. The Projector is operated by the PC through the Serial Connector.

OPL-3D exhibits low-measurement uncertainty (120 mm) over large measurement areas (450 x 340 mm), linearly scalable in the case of smaller areas. Special care has been devoted to flexibility of use, in-field measurement setting, reconfigurability and robustness against environmental light changes and surface colour and texture.

Fig. 5 shows the acquisition of the blue car already seen in Fig. 2. Multiview alignment and registration is performed by either purposely designed software or by means of commercially available products, depending on the complexity of the process.

OPL 3-D has been put into the market by Open Technologies s.r.l., Italy, a start-up company of the University of Brescia, under the Trade Name of 3DShape, in a manifold of versions, including sophisticated software for multi-view combination, point cloud manipulation and transformation, up to surface generation.