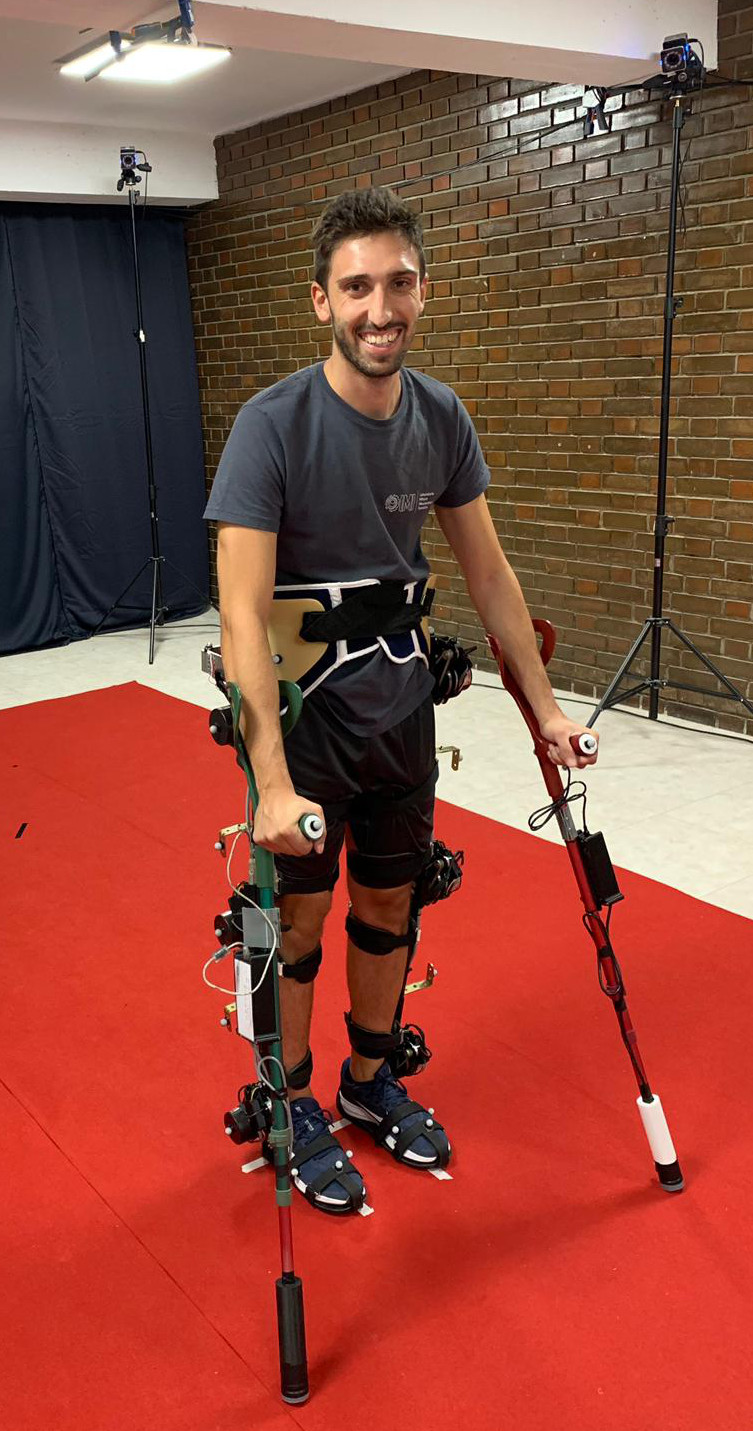 A new collaboration with the Cajal Institute in Madrid has just begun: this time our students Pietro and Marco will be involved in a project called CADENCE.

CADENCE is a project that will evaluate the H2 exoskeleton of Toledo hospital using the instrumented crutches developed in our laboratory. They will help users to maintain balance and at the same time provide values of force directly related to ground reactions.

The project will involve healthy users, who will be guided by audio feedback, allowing them to step on when they reach a specific force threshold on the crutches. In this way, we hope to reproduce the movements of a paraplegic exoskeleton user.
The target metrics chosen are the forces at the ground (provided thanks to the instrumented crutches), the kinematics of the user and the spatio-temporal parameters of gait, acquired using a Vicon system and reflective markers on the exoskeleton and its pilot.

The experiment will be performed with the assistance of Technaid (Arganda del Rey), and CSIS (Madrid), where our students will spend the summer.

From 21st January to 2nd February the Laboratory of Mechanical and Thermal Measurement of the University of Brescia will be hosting 8 students from the scientific secondary schools of Iseo and Salò for an internship focused on the recent redefinition of SI base units, supervised by the manager of the laboratory, Professor Matteo Lancini.

In the program, students learn about of the projects of the laboratory, participate to experiments, collect and analyze data and defines the concepts of estimation, uncertainty and repeatability.
The techniques of basic metrology are used to operate with data of experiments of calibration of load cell and LVDT, measurement of repeatability and position of cobot Sawyer and the study of the times of reaction and movement of the arm, obtained by a system of EMG and potentiometers, made by the students of the laboratory.
The analysis of the results permits to comprehend the meaning of the uncertainty as indicator of dispersion essential to connect probability and distance from estimation, and discredit the error theory, outdated in the scientific field, but still taught in secondary schools.
The studies on the uncertainty show the reasons of a necessary redefinition of the International System: for centuries the units were defined as quantities of objects that depend on stability of the prototype in time and which values are known with an uncertainty.
To overcome this problem, scientists tried to define all the units in reference to constants, and not to objects, obtaining in this way benefits in terms of consistency, stability and accuracy.
After the 1960 and 1983 Metre Convention, the mass remained the only fundamental quantity to have a physical prototype as a unit of measurement and be subjected to uncertainty of calibration and instability.
Only with the General Conference on Weights and Measures of November 16, 2018, the kilogram was redefined with physical constants.
The new definition of kilogram is realised thanks to the interdependence between the quantities of the SI; it reduces the uncertainty and permits getting more reliable and economical measurements concerning mass, strength and energy. This is a real revolution in scientific, pharmaceutical and industrial fields, which also makes the SI more democratic and accessible.

On 20th May 2019 the scientific world will go through a revolution: after years of working, the SI will redefine the kilogram in function of a set of universal constants. The kilogram is the last unit of measurement that was still defined by the prototype conserved by the BIPM.
This change will not affect daily life (“a kilo of apples will remain a kilo of apples”), but the youth, who study scientific subjects, must know this great change. So, how can this news spread in schools? The bureaucratic procedures will take much time, so students could have access to updated textbooks in schools only in few years. However, we can do something meanwhile…
The MMT Laboratory of UNIBS, coordinated by professor Lancini, is hosting 8 students from secondary schools “IIS Antonietti” from Iseo and “Liceo Fermi” from Salò. The students have received this opportunity thanks to the “Alternanza Scuola-Lavoro” national internship project.
In this week, pupils had theoretical lessons with the teacher, studying metrological and statistical topics, such as calibration, repeatability and uncertainty. The professor has used a clear language which all students that attend the 4th year in a scientific Liceo can understand.

Between activities, the students have visited many university’s laboratories. They have seen other machines and engineering techniques, and found out how a researcher works, that isn’t a clear idea for the people that do not know anything about the universities.
Next week, students are producing educational materials about the SI and its redefinition, as posters, presentations or videos, to share them in secondary schools. 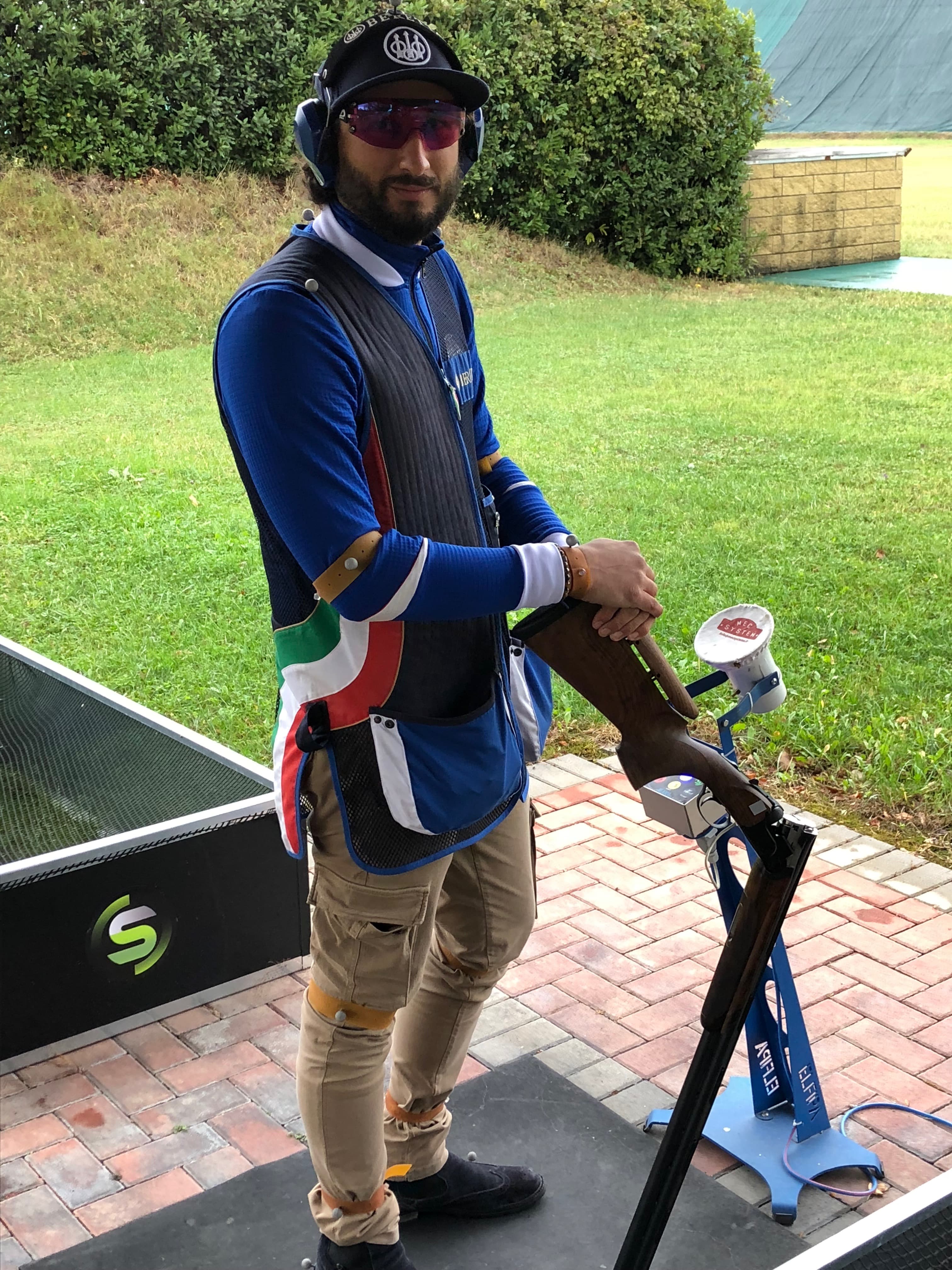 Despite the uncertain weather conditions, the TRAP-Lab and BRaIN teams had an intense day of testing. The new motion capture system, installed experimentally at the TRAP CONCAVERDE field in Lonato del Garda, allows to measure the kinematics and dynamics of the athlete, both before and during the shooting action. The exploratory test will allow to evaluate the system’s reliability and the measurements’ accuracy.

First Semester is now starting in Brescia, but some of our master students are currently in Paris for their exchange semester at the University Pierre et Marie Curie.

Good luck and good work to all: have fun, but also make new experiences and develop skills to take back to your work in our lab!

In the first year of master at “rehabilitation” course in human science motion of Groningen University students are invited to experience directly the tools that are going to be key of their studies, in a funny and at the same time pragmatic way, to understand the difficulties that occur to people who use these tools daily, also in sports.

Our students Paolo and Ridi, working there, had the pleasure to participate and understand this context in a conscientious and recreative way.

First hand experience on what you are working on is important: every time you design a measurement system it’s best to understand deeply the subject beforehand. 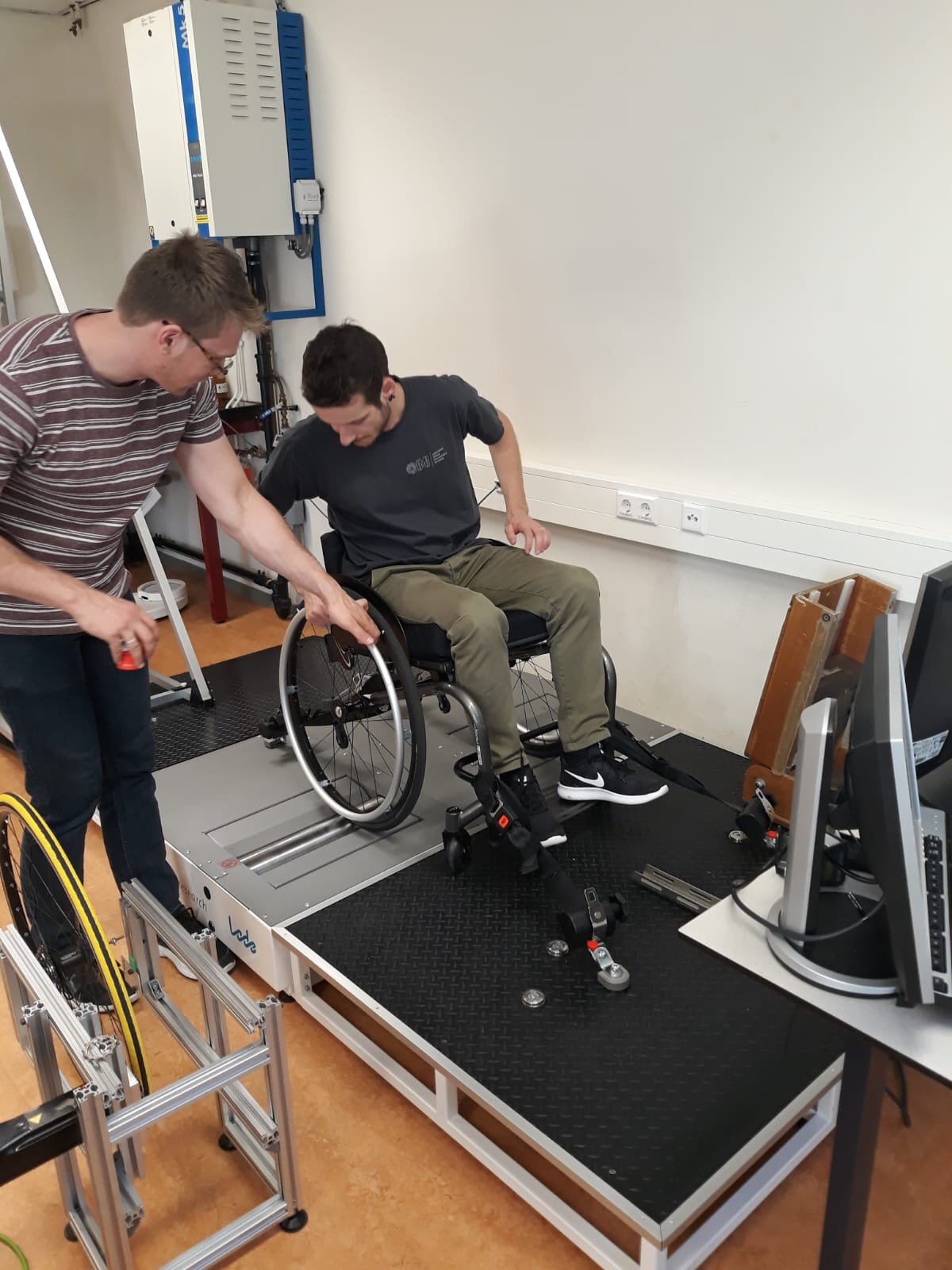 We are working side by side with Groningen University to validate a new ergometer for persons and athletes in wheelchairs.

The device was developed by Groningen University and Lode: Servo engines, together with a load cell run on a feedback loop with a biomechanical model to reproduce overground behaviour.

MMTLab is involved with two of our master students, Paolo and Ridi, to design the calibration setup to validate the ergometer and understand its measurement accuracy in different conditions.